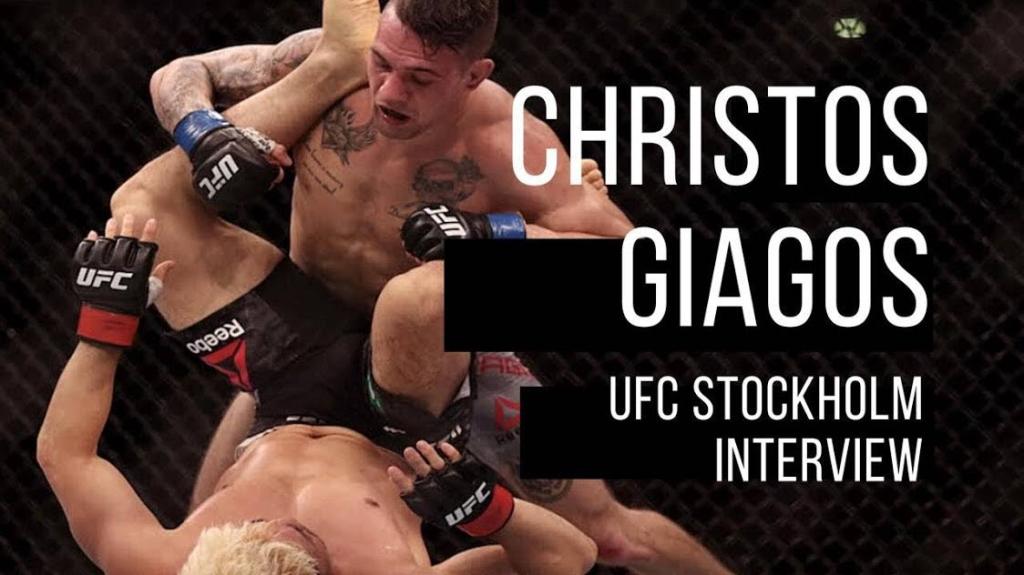 In this interview, we speak with Christos Giagos ahead of his UFC Stockholm fight with Damir Hazdovich.

Christos Giagos is a UFC lightweight contender who is in the middle of his second stint in the promotion. He is set to take on “The Bosnian Bomber,” Damir Hadžović at UFC Stockholm on June 1st. We had a chance to sit down and talk with Christos ahead of his fight on our podcast.

Giagos is no stranger to traveling. He’s been out of the country many times. While fighting near home is nice, sometimes it’s the new places the UFC takes you that you can’t pass up. “I told my manager, ‘Yo, look, if they offer me a fight, I would like to stay in the states this time.’ Then they offered me Sweden and I was like, ‘Aw, Sweden is dope, so, you know what? Let’s do it,'” says Christos.

It won’t be going in it alone with Giagos, however. He has an old friend he is meeting up with and will get to watch him fight on the big stage. “I’ve got a friend out there. He used to live with me in the states. He got deported back and he’s going to come to my fight so I’m excited. If I was going to go anywhere, that’s one of the spots I would go to.”

As for every day life, Christos Giagos eats, sleeps, and breathes the gym. “I live down the street from the gym. I teach crossfit, strength and conditioning and kickboxing as well. I do personal training as well. The money I make fighting, I try to save it as much as I can and just pay my bills with work. It keeps me busy and it keeps me in the gym. I love to be at the gym.”

All that gym time has translated to improved skills in the octagon for Giagos. While his UFC return against Charles Oliveira didn’t go as he had hoped, he looked great in the fight. Since then, he’s gotten back in the win column and looks to start his win streak in Stockholm.

“Every day, I’m getting better.” Christos continues, “I felt like when I came in the Oliveira fight, I was actually performing very well. I was actually really excited with my performance. I wish I opened up a little more. But, I was a little nervous of the takedown. This guy’s jiu jitsu is just next level, he holds the most submissions. I felt like I was doing really well. Everyone had me winning the first round. I am just continuing to get better. That’s why I like this fight a lot. His striking reminds me a lot of Charles. It’s very technical Muay Thai. But, this time I don’t have to worry about the take down. I can open up a little more and I don’t have to be afraid to go for takedowns myself. I’m just continuing to grow and fix up all the holes I have in my game.”

As for his opponent, Damir Hadžović is no slouch. Being a big time kickboxer in Europe, Hadžović has had plenty of success in the octagon, amassing a 13-4 record with six finishes. That doesn’t even phase Giagos. He feels he has the tools to get the job done at UFC Stockholm.

“I always work my wrestling. I feel he’s a little weaker on the ground. He has some decent jiu jitu with all the black belts that he’s fought that couldn’t submit him. My wrestling is improving a lot. I started off as a wrestler. I definitely want to mix that in if I see the opportunity. But, I think I’m a lot faster than him. Power-wise I never really struggle with that. I’m usually one of the stronger fighters in the cage. I know he’s very technical, you know, European kickboxing. Very crisp standup. But maybe he lacks a little aggression at times and that’s my game.”

Growing up, it’s almost every kid’s dream to get on ESPN’s Top Ten. With the best plays taken daily from sports across the globe, getting recognized as one of the best plays that day is just something out of a great movie. Giagos is no exception. “It’s a dream come true. When I was in elementary school, my dream was to be in the NFL. I loved football. As I got older, I wanted to be a basketball in the NBA. I just wanted to be a pro athlete. Now I get to live that dream.”

“I got to fight on Fox, I get to fight on ESPN. My dad got me into sports so it’s making him happy. He’s so proud of me and it makes me feel good. Words can’t describe the feeling.”

MMA is an ancient sport. Back in the Roman days, gladiator events were entertainment for many. Being from Greece and dubbed “The Spartan,” Giagos is prone to that sort of not only entertainment, but competition as well. “It’s one on one and people trying to hurt each other. It’s like the longest type of sports there is,” says Christos. “Back in the gladiator days, we’re definitely modern day gladiators. You get locked up and just fight. We get to go to war with each other. There’s just no weapons. Cage fighting has to be the closest thing to gladiator fighting that there is.”

With the rapidly approaching UFC 238, all eyes are on the main event. Henry Cejudo is set to move up to bantamweight and take on Marlon Moraes for the vacant bantamweight title.  Christos Giagos has his eyes on the main event as well. When asked about his pick in the fight, he was very even, but edged towards Cejudo. “I got Cejudo, man. I’ve been a fan for a while and I just think he’s getting better and better every single fight. I look at the TJ fight and his confidence is through the roof right now. But, you know Marlon is really dangerous. I can definately see it going both ways. But, my bet is on on Henry.”

You can listen to the full episode anywhere you get your podcast as well as the Spotify link below!