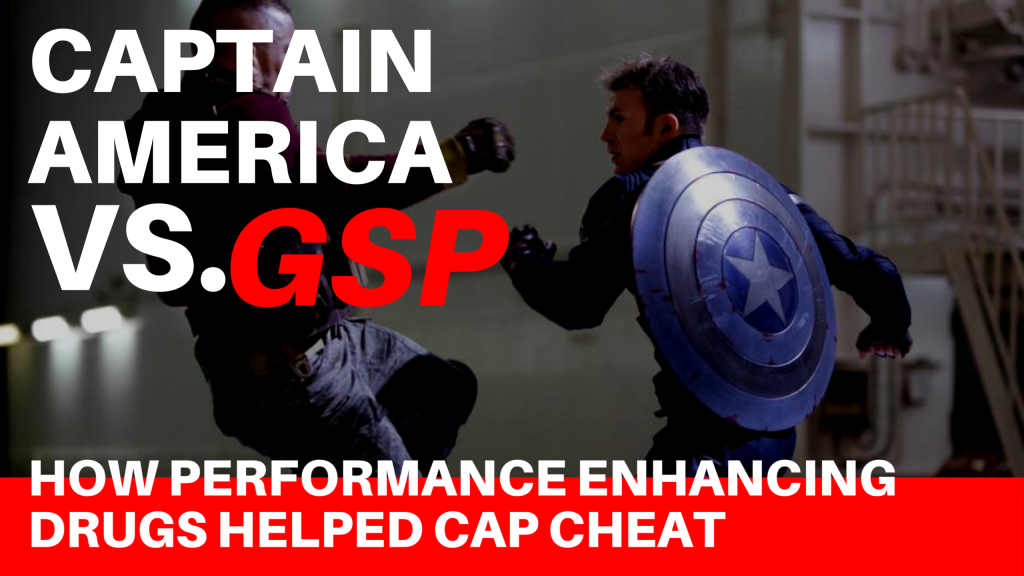 Hey Marvel fans! We are back after a long wait from our last superhero breakdown. I’ve been looking for a good scene to break down. The Reddit crew asked for me to do the Civil War airport scene. I tried and tried but the fighting in it was mainly superpowers and no real technique to dive into. That said, I searched far and wide for a new scene. I thought to do the Black Panther waterfall scene, but then Mr. Boseman tragically passed away. I didn’t want to click-monger and piggyback off his passing. Then a week or so later, it dawned on me…

The greatest mixed martial artist of all time, Georges St-Pierre, fought Captain America at the beginning of The Winter Soldier. He was Georges Batroc, also known as Batroc the Leaper. This was a natural collision course for the two things I love: MMA and the MCU. So, today, we are diving into the showdown between the greatest MMA fighter of all time and a super soldier.

If you missed our first MCU breakdown, check it out.

Before we get down to the nuts and bolts of Captain America versus Batrok, it’s important we know who plays Batrok: Georges St-Pierre, or as he’s also known, GSP. Saying someone is “the greatest of all time” is always a stretch. Michael Jordan and LeBron James have made claims for their case as the basketball GOAT. Babe Ruth, Hank Aaron and Barry Bonds are three in baseball. But it is without a doubt that GSP is the best mixed martial artist of all time. The only guy close to him is the great and controversial Jon Jones. But, at the moment of this writing, GSP is the best fighter to ever grace a cage.

His accomplishments run deep. GSP was inducted into the UFC Hall of Fame in 2020. He is the three time welterweight (170 pound) champion and won the middleweight belt. In his welterweight reign, he defeated Jason Miller, Sean Sherk, B.J. Penn twice, Matt Hughes twice, Josh Koscheck twice, Matt Serra, John Fitch, Thiago Alves, Dan Hardy, Carlos Condit, Nick Diaz, and Johny Hendricks. The only two career losses suffered by GSP were to Matt Hughes and Matt Serra, both of which he avenged (pun intended) by destroying them the second time they fought.

Then, GSP retired in 2013 after his close fight with Hendricks. Four years later, which is an eternity in terms of an athlete’s fighting career, GSP returned to the cage one last time to fight for the middleweight (185 pound) belt against Michael Bisping. Bisping moved down from 205 in his career to fight at middleweight and beat names like Anderson Silva, Dan Henderson, and Luke Rockhold. Bisping’s career in itself is Hall of Fame worthy. And at UFC 217, GSP dominated Bisping, choking him out in the third round, becoming the fourth fighter to win two belts.

In a recent MMA Mathematics section, we ranked Georges St-Pierre the best ever with an opponent win percentage of 84.82%, a 30.75 fight experience among other factors. GSP has won the Fight of the Night award five times and Performance of the Night twice. Needless to say, GSP is decorated.

Tale of the Tape: Georges St-Pierre Versus Captain America

The fight with Captain America would be GSP’s biggest challenge to date. Captain America, as you already know, is a super soldier pumped full of performance enhancing drugs. While the UFC prohibits such uses, the United States government doesn’t have the same apprehensions. SHIELD sent Cap on a mission with STRIKE to free hostages aboard a SHIELD vessel held by pirates led by GSP. The covert mission sees Cap and Black Widow sneak aboard the ship with their strike team and that is where Captain America and Georges St-Pierre have their face off.

To start the fight off, GSP catches Captain America by surprise by coming out of the shadows with a high flying kick to the head similar to the kick Fabricio Werdum caught Travis Browne with at UFC 203. Cap is enhanced enough to have superior reflexes and blocks the kick with his shield. Cap tumbles backwards as GSP stalks him down. When Cap gets up, he has his shield up and GSP throws another high kick that knocks back Cap. This type of kick is straight out of taekwondo and karate training montages and can be a bad day for anyone who doesn’t have a shield of vibranium.

Then GSP gets down and dirty and throws a flipping drop kick at Cap on the ground, which is also known as a rolling thunder. GSP looks to incapacitate Cap with a huge kick to the nads. Luckily for America’s hero, that just misses. You can see the look on Captain America’s face that he is disappointed in Georges for the dirty fighting and knows that he has to do something if he wishes to dethrone the UFC double champion.

With both fighters on the ground, it is a race to who can get up first. In this point of the fight, Cap has the shield in his left hand. Being the battle tested veteran GSP is, he knows a kick to the head on that side will he parried with Captain America’s shield. St-Pierre knows he will need a split second longer to swap to where he can get a head kick getting up. As mentioned earlier, it’s a race to get up, so as Captain America tries to get up, GSP sweeps his leg, where his weight is posted on, and Cap falls back again. This gives GSP the time to switch lead legs and fire off a high kick from the ground while Captain America is caught off guard and off balance. It lands but doesn’t phase Cap.

He stumbles back a little which allows GSP to get up and fire another high kick to the sternum that lands without the shield this time. It is picture perfect cinematography and has fantastic visuals. Right now, Georges St-Pierre is in complete control of this fight.

Here is where GSP makes his first real mistake. He does some capoeira flippy stuff that is really fun to watch. But he underestimated Cap’s reflexes and Captain America is able to roll away and get to his feet again.

While Cap is on his feet, he’s still not out of danger just yet. GSP charges ahead, crossing IPs and throws a Superman punch that has Captain America backpedaling.

Time for a tangent. The fact that Georges St-Pierre throws a Superman punch has some implications for the MCU. The Superman punch was named after Superman because it looks like Superman as he’s in flight. Knowing this, Superman comics seem to be canon within the Marvel Cinematic Universe because without them, the punch wouldn’t be named. Now, back to the breakdown…

Here, GSP let’s his anger get the best of him. He pounds his chest and starts pressing forward again. He comes with a flying knee followed by a barrage of kicks all perfectly timed by Captain America. GSP then makes the exact same mistake and kicks high, over extending himself, allowing Cap to get his lead foot planted.

Now, Captain America is in position to counter with Georges St-Pierre. He stands his ground instead of backing up, and parries all of the kicks coming his way from the champion.

On the last kick from St-Pierre, he steps in a little too close and allows Captain America to land a couple knees to the stomach, a devastating move. One critique I have for Captain America here is his Thai plum. You can see he has St-Pierre’s head held with his right hand on the left. If he were to move to the right side of his head and grab the other side with his shield hand, he could land some very powerful knees to the face that would likely end the fight. But, no harm, no foul. Just keep that in mind for next time, Cap. America loves you and that ass, but learning another countries fighting technique would only help you serve America better. Cap goes on to toss GSP behind him and GSP flips, doing some awesome gymnastic stuff but a terrible waste of energy. Poor move on the champ’s part.

Round 2: More than Just a Shield

Round two starts when GSP taunts Captain America. We learn here that Cap speaks French, as well. Captain America decides to give GSP a fair fight and puts his shield away and removes his helmet that provides him with extra protection.

Captain America exercises patience here. Instead of charging GSP, he waits for the champ to come with him. Of course, GSP does because he’s wobbled and desperate to get a finish. He throws another leg kick, but this time Captain America just straight up kicks the shin of St-Pierre. St-Pierre is obviously hurt by this and grimaces. Cap then fires a teep to the chest of GSP, knocking GSP down. A teep is a straight kick that can be devastating. The best example of a teep is when Anderson Silva folded and finished Vitor Belfort with a teep to the face.

Next, Captain America gets away with murder. GSP gets up because there’s a championship mentality in him. He has no quit. He is there to be the best and prove it. Captain America foolishly runs at GSP with his hands at his side. When you do, it can have disastrous results that can end up like this:

Luckily for Cap, GSP doesn’t throw the knee and he manages to push St-Pierre through a door where he can get full mount and delivers one huge ground and pound punch that puts the champion away. Captain America has defeated the great Georges St-Pierre and captured the belt. The rematch has not yet been set.

The fight between Captain America and Georges St-Pierre proved that no matter how many years you’ve been training and how much you’ve accomplished, being juiced to the gills with super soldier serum developed by Howard Stark and SHIELD will always reign supreme.

I hope you enjoyed this fun section concocted by myself. The pandemic has brought some dark times in people’s lives and I hope this brings a shed of joy to your life. I plan on doing more of the Marvel analysis sections and am looking forward to doing something on the upcoming Black Widow movie whenever it comes out.