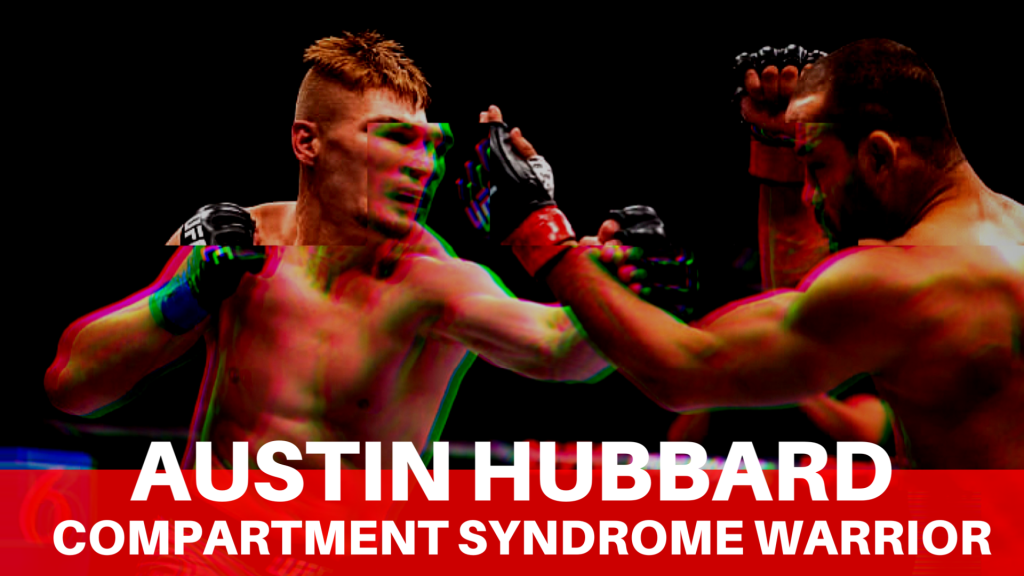 Listen to the entire podcast episode on Spotify below. Available everywhere else you listen to podcasts!

Austin Hubbard is a lightweight UFC prospect sitting at 11-4 on his career. Originally he was slated to face Joe Solecki at UFC Apex this weekend but Solecki had to pull out due to personal reasons. Now, Hubbard faces Max Rohskopf, an NC State wrestler who is 5-0 in MMA. Hubbard brings the pain and will look to do so against Rohskopf.

Austin Hubbard has a condition called compartment syndrome after his first win in the UFC over Kyle Prepolec. Compartment syndrome is a condition where damage is sustained to an area, in Hubbards case, his upper thigh. The swelling from the damage causes the blood flow to be restricted, having the potential to kill the muscle causing limb loss. Hubbard told us his story on the podcast and it was one of the most insane stories I’ve ever heard. Instead of me writing it, I highly suggest you listen to the audiogram on YouTube below.

Hubbard’s success has been set back a little since joining the UFC. Hubbard lost a short notice fight in his debut against Davi Ramos. He then rattled off his win against Prepolec. His third fight was against Mark O. Madsen, a silver medalist in Olympic Greco-Roman wrestling. Hubbard notes that the pace in the UFC is different than anything he’s come across on the regional scene.

“It’s crazy because I’ve had such great success at the regional level. Before getting into the UFC, I held four different regional titles all in different states, the biggest one being the LFA World Championship. The learning curve in the UFC is just a different level, man. I know I have the skill set and all the attributes and I’ve just kind got to put it together mentally. Really knowing you belong and really and just putting things together is at a different pace on this level. I do feel like I’m where I need to be now to really hopefully I start stringing some of these fights together. Hopefully keep going off and having a successful UFC run.”

Thud trains at Team Elevation in Denver. The names at the gym is mind blowing. In addition to Hubbard, Elevation has Justin Gaethje, Alistair Overeem, Cory Sandhagen, Neil Magny, Drew Dober, Curtis Blaydes, and more to rattle off. They have some of the best fighters and coaches in the world. Hubbard believes he has the best tools in the world to become a better fighter.

“Since the UFC starting to put back on cards, we’ve had a teammate on almost all the cards so far. It started off obviously with Justin and Drew Dover and Alistair Overeem. Then finished off with Neil Magny. There’s been a handful of them and they they put on such spectacular performance results. It’s really motivating and it’s a good measuring tool. I get to train with these guys every single day and they push you. I push them as much as they push me and I’m sure we do get equal amount of good work. Seeing their success is really motivating because I know I’m able of that same type of success because we’re all working together. I’m where I need to be and I know I have what it takes to be successful at this level. Like I said earlier when I was touching on the speed of the UFC, it’s just a different learning curve here and I think you know the the mental headspace.”

As mentioned in the beginning of the article, Hubbard was supposed to fight Joe Solecki. But now he’s fighting Max Rohskopf. When Hubbard spoke on the Solecki fight, he was confident he’s already seen better than Solecki and by association, Rohskopf as well.

“My coaches have been telling me what game plan as best we can. I do feel like I faced the best wrestling in Mark Madsen and grappling and Davi Ramos, no doubt.”

“I just need go out there and perform and open up and not lose. I do believe I’m better everywhere,” said Hubbard of Solecki.

Hubbard on UFC 252: Khabib vs. Gaethje

With Justin Gaethje as his teammate, it was obvious who Hubbard is going with with the big lightweight fight between champion, Khabib Nurmagomedov and interim champion Justin Gaethje. Hubbard believes Gaethje is on a new level and will come home undisputed lightweight champion.

“He for sure on another world. We definitely know where he’s at, what he brings to the table and I definitely do believe in where he’s at right now and how he’s fighting and just his headspace. How he’s competing and his skill set is just his next level right now and I think he’s definitely going to take that belt home and shock the world.”