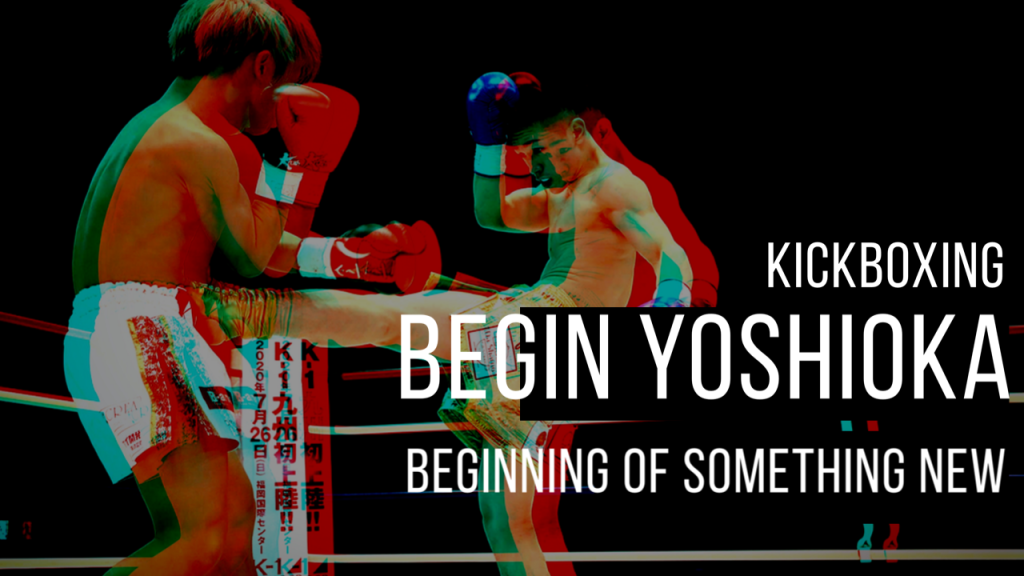 Begin Yoshioka has distinct karate influences in his kickboxing style. He began studying karate at a young age and his love of Jackie Chan led him to where he is today.

“When I was young, I started karate, admiring squadrons and Jackie Chan. I longed for Mr. Masato of K-1 at that time and wanted to stand on the stage of K-1 and became involved in kickboxing!”

Outside of kickboxing, Yoshioka has other hobbies as well. “[I like] golf, snowboarding, dancing, learning English, cooking!”

Yoshioka is serious about learning English as well. It will help him in his kickboxing journey when he goes more international and it helps him in his day-to-day job as well.

“I go to ECC International Language College, a vocational school where I study English, so I make use of it and work as an international flight staff.”

His win at Krush 112 was an action packed, fast paced fight. While Begin Yoshioka didn’t get the finish, the thrill of victory was all the same once his hand was raised.

“I was the strongest opponent in the K-1 first race. I was so happy that I could not describe it!”

Outside of fighting, Yoshioka is normally a fun-spirited person. “Usually, I’m spattling, laughing, stupid,” says Yoshioka. “But when it comes to laughs, the game turns on and it changes in my eyes!”

With the coronavirus affecting so many people, it’s all people are asking about these days. For example, in a previous interview, we learned fellow K-1 fighter, Eder Lopes, was forced to train out in the street ahead of his fight at K’Festa 3. Yoshioka was fortunate enough to not be affected by the virus. “Training was not so much affected! As usual, we were able to drive in!”

With the virus raging, K-1 was forced to have no crowd at Krush 112. While the energy is always nice with a crowd, Begin Yoshioka said the thought of people simply watching on TV was motivation enough for both he and Koki to go for the win.

“Even in an empty stadium, there are people watching over the TV, so both players were fighting to win!”

His career is already decided. Yoshioka is happy to be where he is but with some hardware around his waist. “Take the belt at K-1 and work as an airline and ground staff!”

Don’t expect Begin Yoshioka to jump ship for any other sport. “No other martial arts,” says Yoshioka.

Begin Yoshioka is only 19 years old. He is already fighting for K-1 and winning on one of kickboxing’s largest stage. His fighting career is young and promising.