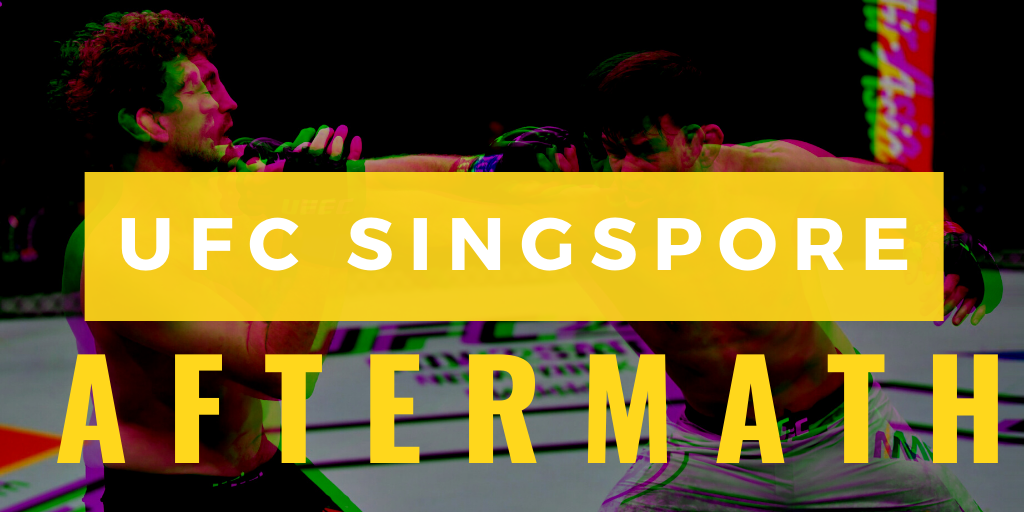 UFC Singapore is in the books. The UFC did a good job setting up a card with great matchmaking with fighters that, while they may not be well known, put on a fantastic show. In this week’s Aftermath, we take a look at what’s next for some of our favorite fighters including Demian Maia, Ben Askren, Cyril Gane and more!

Cyril Gane is a Submission Magician?

Cyril Gane defeated Don’Tale Mayes at UFC Singapore, something many thought he’d do. However, most people didn’t expect the former kickboxing prodigy to win by submission again. Well, he did. He defeated Mayes in round three via heel hook. So to recap, Gane came into the UFC 3-0 with two knockouts and a submission. He won his first two fights in the UFC via submission. Again, he was about to sign a contract with GLORY.

I feel that Gane’s eagerness to go to the ground is a great thing for the prospect. He has hands and everyone knows it. Going to a ground game proves he’s actually learning the sport completely and is utilizing the tools to become champion one day. That should scare the division. If Gane can put in the work and get submissions on the biggest stage in the world, it means he is learning and retaining these new skills at light speed. Heavyweights, be warned. Cyril Gane is a problem, big time.

Cyril Gane fought well against Mayes. He took his time and wasn’t in a rush getting him out of there. He was content winning the fight properly. When he saw an opportunity to finish, he would take it. Until then, he was patient, waiting menacingly. He got the opportunity in the third round, not a knockout, but a submission and finished.

I cannot say enough about Cyril Gane, and think he was the most impressive on the night, even over Demian Maia. He improved to 5-0 on his record. Now, he should takes a step slight up in competition.

Maurice Greene, who suffered a tough loss to Sergey Pavlovich on the same card this weekend, is a good next option for Gane. Greene’s size would provide for a unique challenge to Gane. The 6’7″ Green would have the size advantage and I would like to see Gane take on someone bigger before he gets to the top of the division and has to face giants like Francis N’Gannou. Another one of those bigger guys would be Juan Adams. Gane has the skill advantage, but Adams is such a monster of a human being he might be able to just pin him down.

As the heading says, Beneil Dariush is very good at Jiu Jitsu. In just over two minutes, he put away Frank Camacho with a rear naked choke. The win was his fifth in the UFC and his first three fight win streak since 2015.

It’s time for Dariush to take another crack in the top 15 in a stacked lightweight division. Dariush and Alexander Hernandez fought early in 2018 and Hernandez ran through Dariush. After UFC Singapore, I think a rematch is in order. Hernandez is a great stand up fighter. Dariush can get that fight back if he can stay clear of Hernandez’s hands and early blitzkrieg. Hernandez has shown more patience and that could benefit Dariush.

A second option would be a war with Islam Makhachev. Makhachev is an insanely well rounded fight. It would be a leap up in competition for both Dariush and Makhachev. A win for either would be a career pivot to the top.

Stevie Ray is Gifted A Win Over Michael Johnson

Michael Johnson’s return to lightweight was supposed to be the re-emergence of his career. He had struggled at lightweight and lost to Khabib Nurmagomedov (the fight where he debatably rocked him, I doubt it), Justin Gaethje, and his featherweight debut with Darren Elkins. Two wins later, he dropped a featherweight scrap to Josh Emmett, a fight he was winning until Emmett blasted him.

Now, don’t get me wrong, in his return, he looked good in the first two rounds. The third round was where I had issues with Johnson’s performance. Once Stevie Ray finally got him to the ground, it seemed as if Johnson was clueless and almost gave up. He managed to get beat down for half the round and that’s what may have cost him the fight.

Now is time for Johnson to pivot quickly. He didn’t get much damage and is in desperate need of a win. Thiago Moisés is a solid option for Johnson and would be a winnable fight. Another fight that should be winnable is Dong Hyun Ma. Ma isn’t a threat on the ground, somewhere Johnson struggles at. He needs a quick win to stay out of his own head and self destruct.

Stevie Ray may have been given a gift with the win over Johnson, but he will undoubtedly reap the rewards of the victory. Ray hasn’t exactly had the best run in the UFC. He defeated Paddy Pimblett, a Cage Warriors phenom, in a grappling bout at Polaris 11, which gave him some steam. Now with a win over Johnson, he looks to keep sharpening his tools and trudge his way up the rankings.

Davi Ramos is a good next choice for Ray. It’ll be another recognizable name to add to his resume in a deep lightweight division. A win over Ramos, in addition to one more after should give him the opportunity to fight for a ranked position in the UFC.

Marc Diakiese is a different test. Diakiese is very talented with his hands and brings an exciting fight every time he fights. Seeing he and Ray go at it would be a classic clash of styles for fans.

Demian Maia is The Grappling MF of The UFC

UFC Singapore brought more misfortune for Ben Askren. Having went unconscious in all three of his UFC appearances, he’s gone from “the least hit MMA fighter” to being boxed up by a Jiu Jitsu player. Askren showed more creativity in his striking, throwing some sloppy spinning back fists and uppercuts. Don’t get me wrong, when the fight went to the ground, Askren looked like a completely different fighter. He and Maia had some of the best scrambling I’ve seen in the UFC for a good, good while.

Unfortunately for Askren, he’s on a two fight skid in the UFC, his only two career losses. He came to the UFC to prove he’s the best in the world, and now he’s simply not. Weather it be time or actual talent, Ben Askren is a good fighter in the UFC, not the best. He is limited on who he matches up with now. His star power has seemed to fade, there wasn’t as much buzz around this fight as there was pre-Masvidal. And now, there will be even less in his next fight. It seems that ONE Championship did get the better half of the trade with Askren and Demetrious Johnson. I don’t think we’ve seen the last of Ben Askren in the UFC, though.

As mentioned earlier, Askren’s options are limited. He doesn’t have pull in the UFC any more to get the fight he wants. The hit list he made, tear it to pieces.

A fight I would personally love to see is “Cowboy” Oliveira and Askren. The two would be a great matchup that Askren, while at a disadvantage on the feet, would have the size advantage. It would also give Oliveira an opportunity to get another good name on his resumé. But, if we’re talking about a better opponent, Michael Chiesa is the fight to make. Both are incredibly adept on the ground and would be another great grappling exhibition match for fans.

Demian Maia looked very good in the fight with a one dimensional fighter, but that’s to be expected. For the most part, he got the better of Askren on the feet, namely the first round. While Askren did get the fight to the ground, Maia was not out of his element and did everything he did to keep the fight going. Eventually, he got the back of Ben Askren and sunk in a choke, ending the fight.

Maia said he and Diego Sanchez should fight, and I agree. That’s a fight that needs to happen before Maia hangs the gloves up and leaves the sport. Sanchez and Maia would be a massive service to fans and is the number one option to make.

Then there is the man of a million call outs, Gilbert Burns. Burns is a Jiu Jitsu wizard as well, and for Maia’s last couple fights, I want spectacles. He won’t get a title shot, barring a last minute replacement. So let’s go all out and get another crazy two fights.