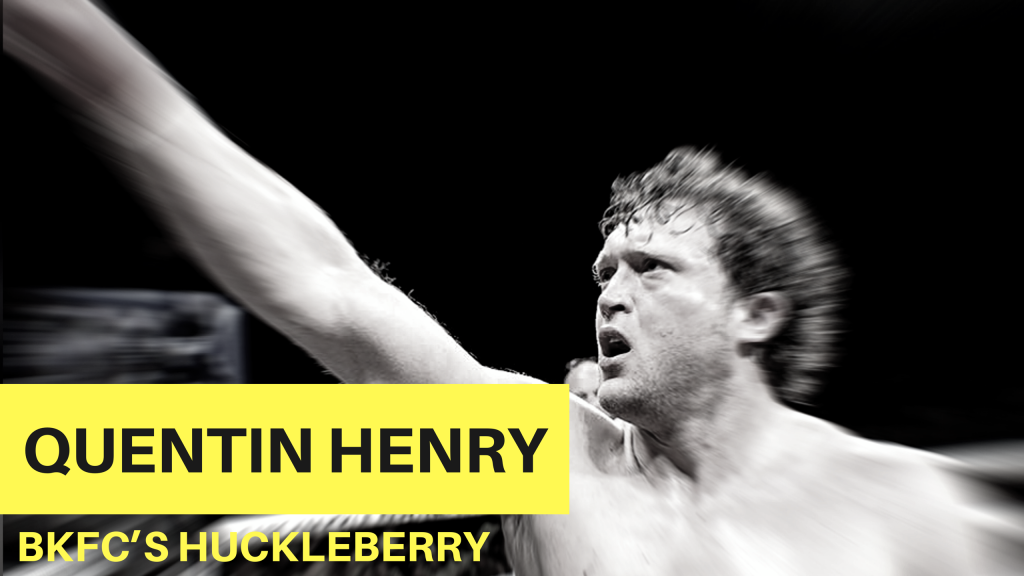 Bare Knuckle FC 7 was another night in the new world of Bare Knuckle boxing. Quentin Henry opened up the card with a wild exchange and a first round knockout win that would set the pace for the entire night. See for yourself.

Quentin Henry is 12-6 as a professional MMA fighter and 1-0 as a boxer. This was an entirely new experience for him. “This was my first bare knuckle match, legal anyway. It was fun. It was a whole lot more fun than I thought it was going to be.”

“This bare knuckle thing is a different animal. The guys are putting on a show. I mean, David, that guy, he gets you amped up. They treat you so good. It’s almost like you’re fighting for your dad, you know? You don’t want to let him down. There is a lot of encouragement from them, they say, ‘Go in there and fight your ass off and respect you for that. We don’t respect you if you win or lose. We respect you if you go out there to fight.’ It takes that way that worry of having to win and then you just let it go.”

Before we talked, Henry and I had to push back our interview time a little. The guy is a firefighter and he had to respond to a call about a fire. “There was a trailer park down the road that had a little kitchen fire. We got it put out pretty fast. I was on the scene when we were texting me.” He literally put out a fire and then called me on the way home. No nerves, nothing. Dude is insane, but that is to be expected from a Bare Knuckle FC guy.

“You run into burning buildings. I’ve talked to people about it, I’ve done boxing and MMA and all that. You don’t get quite the reaction out of telling someone you’re a cage fighter. But, it is another level when you tell them you do Bare Knuckle Boxing. It’s like, ‘What kind of monster are you?’ That’s all they can think. My brain doesn’t work that way. People were asking me, ‘Why would you do bare knuckle?’ I am like why wouldn’t you do bare knuckle? Me and you are just cut from a different cloth, man. This is what I do.”

“Bare Knuckle Boxing is hands down the most manly thing you can do on the planet. It’s like, taking a dump with the door open or something. There is nothing more entertaining and more manly, we’ve been doing it for thousands of years. Let’s go outside and throw some fricken bombs. How could you not want that? I’m a fighter, I love the high, I love the adrenaline. There was some guy that commented on my Instagram, ‘Oh, this dude is on coke,’ because I get excited after a fight. I replied to him, ‘Brother, this drug is way better than coke. You have no idea.’ I guess with anybody, certain people chase that adrenaline. Some people skydive, I just fist fight.”

Going into the fight, Henry was uncertain about a couple things, but he had a general sense of how it would go, or so he thought. “I didn’t realize how fucking close we were going to be to each other,” says Henry. “It was like you’re standing on the line. I knew this was going to go down, I try to vision it before time. It was a lot closer than I thought. When you’re standing there, it depends on what kind of man you are. But, when I’m standing there looking at him, I’m like, ‘I better hit this dude first before he fucking hits me.’ You’re that close. That’s all you can think. ‘I got to get off first.’ That’s where it went.” It shows in Bare Knuckle FC’s product. They aim for action the entire time they fight. Going, almost literally, toe to toe greatly encourages that.

The fight wasn’t as smooth as Quentin Henry saw it. Although he got the first round knock out, he did take a little punishment, getting knocked down twice. He was able to recover and put Brandon Malbrough away. Quentin Henry said, “I said, ‘I’m just going to blitzkreig this dude. I was just so freaking pumped. That’s how it started. I don’t fight that way, I’m not a brawler. I got it in me, but I’m more technical. So we started brawling and I started landing and he was landing them too. But they weren’t effective. Then he hit me with the one that dropped me. I’m not saying the dude didn’t hit hard, because he did, but I’m saying my mind didn’t feel it. I guess there was so much going on that I didn’t feel that he hit me. All I felt was my knee go out. I thought my knee just went out, I didn’t realize he just hit me and knocked me down. I’m like, ‘What in the hell?’ freaking out, grabbing my knee. Then my knee came back, and I hopped up and was like, ‘Damn, he must have dropped me.'”

“Then it clicked in my head, ‘That son of a bitch just dropped me, my knee didn’t go out.’ Then I was like, ‘Alright, let’s do this.’ That pissed me off. Then I jumped on him again the same way. The second one was a slip. I got carried away throwing uppercuts. Then Big Dan gave me the call that it wasn’t a trip, but he’s already counting. I’m thinking, ‘I went down twice, even if I slip again, they’re going to call the fight.’ In the middle of this, I heard my dad screaming, ‘Start throwing your fucking jab! Throw your jab!’ You see in the fight, after that second knockdown, I slowed down, I stopped playing, and I put him down within 30 seconds of that.” And after that, we know the rest. Quentin Henry would be declared the winner, he would have a viral Instagram video and will be eventually fighting in another bare knuckle boxing match.

“It was a big learning deal,” says Henry. “It was a whole lot of adrenaline going on. It was my first Bare Knuckle match. Looking back on it, it’s more fun than I’ve ever had in a competition. I told my dad after the fight, ‘Damn, I’m a whole lot tougher than I thought.'”

“You can see in some of the pictures of right before I threw it. You can see how big my eyes got because I could see it. I felt his soul leave his body when I hit him. When you hit them in the chin, you have a little bit of resistance and you feel this click then no resistance. When you feel that, that’s the button. People say, ‘He got hit on the button,’ that’s it. You can feel that click. That’s why before I finished the punch, I hopped up saying, ‘It’s over! It’s over!’ Then I busted my ass like an idiot. It wouldn’t be me if I didn’t do that, completely ruin my moment.”

The tiger got out of the cage a little bit there, but I managed to get the leash back on it.

When asked if he had found his niche in Bare Knuckle Boxing, Henry was convinced. “For sure. Dave Feldman was super happy with the fight. I’m hoping they have a tournament in a weight class that’s more suitable for me. I’d love to get into something like that. I’m totally prepared to make a home in Bare Knuckle Boxing. I feel like I’m made for that.” Hopefully we get to see more of that beautiful knockout in the future with the promotion.

On the night, fans saw UFC veteran, Chase Sherman, beat Arnold Adams for the Bare Knuckle heavyweight championship. Arnold won the heavyweight tournament started in BKFC 2 at the very same venue he lost the belt in. Henry wasn’t convinced he’d be fighting Sherman any time soon, but welcomed the challenge. “I usually fight at middleweight in MMA. I’m like a 185er. When this fight was called in, I thought it was at 200 pounds. When the contract got brought up, it ended up being like, 210. A couple days later, they called and asked if I will do the fight at 215. I said, ‘Yeah, it’s what I weigh right now.’ So, I got to eat and it was nice. I ended up weighing in at 211.2 and I had breakfast that morning. Sherman weighed in at 260 I believe. If they want to pay heavyweight title shot money, line him up. I’m your huclkeberry. I feel like in Bare Knuclke, I’d like to be around 200 pounds.”

We haven’t seen the last of Quentin Henry in the Bare Knuckle FC promotion. With such a young company, there is so much fun to be had with bare knuckle boxing. Be sure to follow Quentin Henry Twitter, Instagram, and Facebook to keep up to date with all his fighting news.